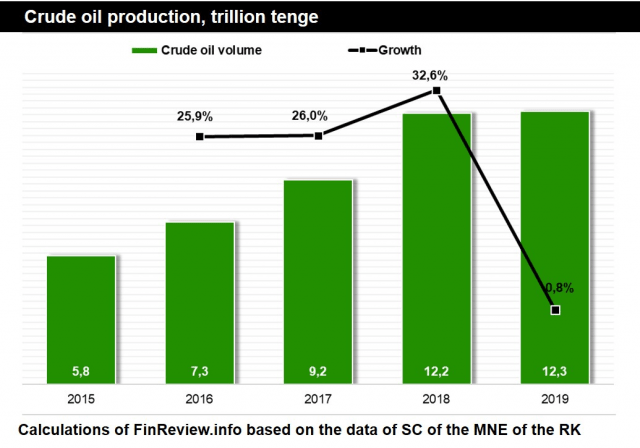 2019 was a successful year for the development of the fuel and energy complex – record oil production, full coverage of the domestic market with Kazakhstan gas, the launch of gasoline exports, the commissioning of 23 renewable energy sources and the growth of investment flows. As a result, the economy of Kazakhstan strengthened and reached GDP growth of 4.4%.

The fuel and energy complex is one of the key factors in the socio-economic development of Kazakhstan and the country’s integration into the global economy. The total volume of oil reserves in the country is about 30 billion barrels, or 1.7% of world reserves. According to this indicator, Kazakhstan is in the 12th position in the world, behind the countries of the Middle East, Latin America, as well as Russia and the USA.

Recoverable gas reserves in the republic amount to 3.9 trillion m3, which corresponds to 1.7% of world reserves. A significant part of natural gas resources is concentrated in Atyrau (43%), Mangistau (29%) and West Kazakhstan (19%) regions.

Over the past three years, the most ambitious projects in the oil and gas industry have become:

discovery of a new oil deposit at the Rozhkovskoye field (West Kazakhstan Region) in 2017;

commissioning the Zharkum field, which will be able to supply gas to the Zhambyl region for almost three decades, reducing the dependence of the southern regions of the country on imports from Uzbekistan.

In 2018, after the completion of the modernization of the country’s largest oil refineries, the volume of oil and gas condensate production reached a record high of 90.4 million tons, and in money terms – 12.2 trillion tenge (an increase of 33% compared to 2017).

In 2019, despite the overhaul of major projects (Tengiz, Karachaganak, Kashagan), oil production amounted to 90.5 million tons, and in monetary terms – 12.3 trillion tenge. The largest volumes were provided by the fields of Atyrau (49.4 million tons), Mangistau (17.9 million tons) and West Kazakhstan (11.7 million tons) regions.

Maintaining the volume of oil production made it possible to maintain export of products at the same level – 59.6 million tons in the eleven months of 2019 (an increase of 1% compared to the same period in 2018). At the same time, for the whole of 2018, Kazakhstan exported 72.5 million tons of oil. The development of the oil and gas industry provided strong support to the national economy – in the eleven months of 2019, the industry’s share in GDP amounted to about 17%, which in turn made it possible to stimulate economic growth to 4.4%.

At the same time, GDP growth was mainly caused not due to an increase in oil production, but due to higher prices for oil and oil products. So, over the year, the cost of a barrel of oil increased by 8% from 61 US dollars to 66 US dollars.

Gasoline production after modernization of the refinery grew by 84%, diesel – by 36%, and jet fuel – three times. According to the data of KazMunayGas JSC, three Kazakhstan oil refineries are capable of producing gas 24% more than the market needs, and the nearest deficit will arise no earlier than 2032. In 2019, the country processed 17.1 million tons of oil with an increase of 5% compared to last year’s period. As a result, gasoline production, including aviation, increased by 14.4% and reached 4.5 million tons (in 2018 – about 4 million tons).

The largest volume of output was provided in the city of Shymkent – 1.9 million tons of gasoline were produced, or 42% of the total output. The region has the newest refinery in the republic. 30% of gasoline production was provided by the Pavlodar Petrochemical Plant (1.4 million tons), and 27.1% – by the Atyrau Refinery (1.2 million tons).

Previously, the domestic market was dependent on imports; its share in some types of oil products exceeded 40%. Nevertheless, the market was in short supply of fuel.

Moreover, now the country does not need to import gasoline and independently covers the demand in the domestic market. So, with gas production of 4.5 million tons, fuel consumption was 4.2 million tons. That is, at the moment in Kazakhstan there is a surplus.

Accordingly, to support the production of factories, the development of export of products is necessary. In this regard, since July 2019, Kazakhstani gasoline began to be delivered to foreign countries. About 20-30 thousand tons of gasoline are exported monthly.

As of early January 2020, the average price of gasoline worldwide amounted to 420.8 tenge per liter. In Kazakhstan, the cost of a liter of gasoline was 174 tenge. According to this indicator, the country took 9th position in the world ranking, which includes 92 countries. It is noteworthy that among the CIS countries gasoline is cheaper only in Turkmenistan – 163.6 tenge per liter.

The difference in prices in different countries is explained by the level of taxation and subsidization of the sector. As a rule, taxes are higher in economically developed countries, which accordingly ensures the high cost of gasoline. Significantly lower taxation in developing countries and countries with economies in transition, as well as in countries producing and exporting oil.

Tax deductions of the 30 largest taxpayers of Kazakhstan account for about 60% of total tax revenues and payments to the state budget.

In 2019, the state budget received 9.7 trillion tenge. At the same time, the 30 largest taxpayers paid 4.9 trillion tenge of taxes, of which 4.3 trillion tenge came from enterprises engaged in oil and gas production.

That is, 44% of the state budget is generated by the oil and gas sector.

For the nine months of 2019, foreign direct investment reached 9.5 billion US dollars, which corresponds to 51.6% of the total volume of attracted FDI.

The share of foreign investment in large oil and gas projects in Kazakhstan, such as Tengiz, Karachaganak and Kashagan, ranges from 80% to 90%.

The reasons for such high rates are the low level of innovation in the country and the insufficient development of human capital. Thus, in terms of the human development index, Kazakhstan is in 58th place in the world, in innovation – in 74th, and in ease of doing business – in 36th.

Since 2016, Kazakhstan began to actively develop renewable energy sources. To stimulate the green energy market, the Government launched a system of fixed tariffs taking into account inflation and changes in the dollar. As a result, the number of commissioned facilities began to increase annually – in 2017, 6 RES was introduced, in 2018 – 10 RES, and in 2019 – 23 RES.

According to the results of 2019, 90 renewable energy facilities with an installed capacity of 1,061 MW are operating in the republic. In the nine months of 2019, they generated 1.65 billion kWh of electric energy, which is 65% more than in the same period in 2018.

According to preliminary data, the share of renewable energy from the total electricity generation is estimated at 2.3%. In 2018, the indicator was 1.3%.

In general, the economic importance of the development of renewable energy for Kazakhstan is that the introduction of “green” technologies will lead to an increase in the energy efficiency of the national economy by 40-60%, as well as to a reduction in water consumption by 50%. Moreover, the transition to a green growth model will allow for additional GDP growth of 3%.